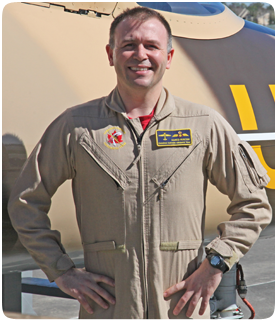 Marco was born in Florence, Italy and grew up in a small town just north of Rome. Exposed to vintage aviation from an early age, Marco was fortunate to learn how to fly in the family’s Tiger Moth biplane.

Hoping to pursue flying as a career, Marco completed his secondary schooling on Canada’s West Coast and joined the Canadian Armed Forces in 1997. He was accepted to the Royal Military College of Canada in Kingston, Ontario and graduated with an Officer’s Commission and a Bachelor’s degree in Military and Strategic Studies in 2001.

His first assignment was as an instructor on the CT-156 Harvard II, teaching basic and advanced students in NATO Flight Training Canada’s (NFTC) facility in Moose Jaw.

In 2007, Marco was selected to fly for Canada’s aerial demonstration team, the Canadian Forces Snowbirds. As one of Canada’s aerial ambassadors, he served as the Team’s number 4 and number 7 pilot for the 2008-2011 seasons and performing at events, fly-pasts and air-shows throughout North America.

After 14 years, Marco retired from the Canadian Forces in 2011, and began his commercial flying career, becoming a first officer on A320 family and B737 airplanes.

When Marco isn’t in a hangar or on a grass strip, he enjoys spending time with family, nature, sailing and traveling.