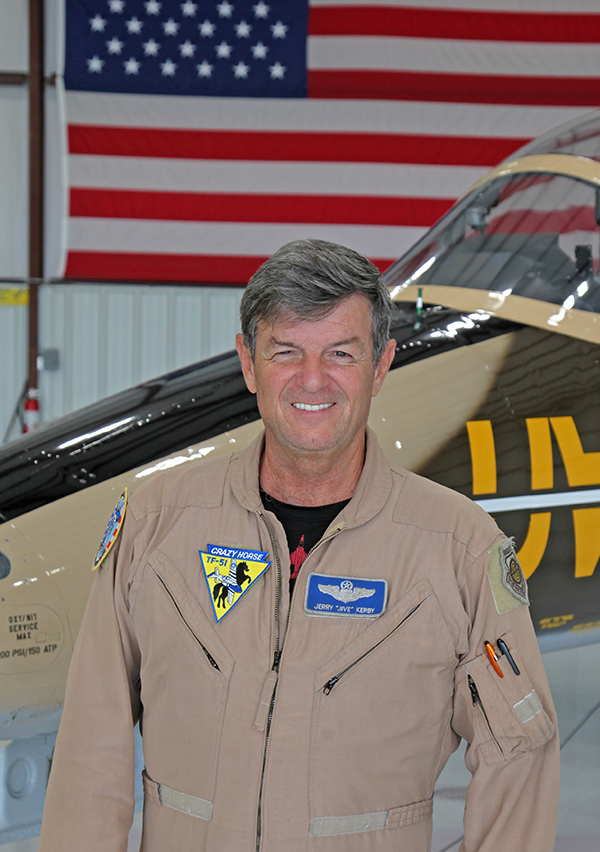 Lt Col Jerry D. (Jive) Kerby, USAF (Ret) grew up in Lancaster, Missouri.  He started flying lessons when he was 15, soloed on his 16th birthday and received his private pilot’s license on his 17th birthday, the earliest age allowed.  By the time Kerby received his BS in Aviation from Northeast Louisiana University (now University of LA-Monroe) and was entering the United States Air Force’s Officer Training School in 1983, he had already earned his Airline Transport Pilot (ATP) License and had logged approximately 4300 flight hours.

Kerby graduated number one in his USAF pilot training class and was awarded a training slot in the F-15C Eagle.  As a USAF Fighter Weapons School graduate in the F-15C, Kerby flew the Eagle in combat with seven Operational Tours, including Desert Storm leading over 20 missions in Southern Watch as the Air-to-Air Mission Commander as well as serving as an F-15 Instructor. Kerby was the F-22 Program Manager during the Raptor’s operational testing.  During his final USAF assignment, he served as the first F-4 Heritage Flight Pilot for the USAF in 2005.  In 2006, after 23 years serving in the USAF Kerby retired amassing over 3400 hours in the F-15C and over 450 hours in the QF-4.

In 2006, Kerby began his career as a civilian air show pilot in a T-33 Shooting Star.  Since then, he has flown at North American air shows as a solo performer in the only civilian F-4 Phantom, the T-33 Shooting Star, the T-28 Trojan, the L-39 Albatross, and the RV-8A. He was a member of the two-ship Paris Jet demonstration team known as Team MS-760 in 2009 and 2010.  He served as the lead pilot of the six-ship civilian jet team known as Heavy Metal Jet Team and later Black Diamond Jet Team during the 2011 and 2012 air show seasons.  He currently flies as a pilot for Wild Blue Rodeo, an RV-8A air show act, as an L-39 solo jet act, and as the opposing solo pilot with the six-ship T-28 demonstration team known as Trojan Thunder. Kerby has over 16 years of air show experience with over 400 low-level performances in high performance aircraft.  He serves as a Certified Aerobatic Competency Evaluator (ACE) through the International Council of Air Shows (ICAS) and served two terms as member of the ICAS Board of Directors from 2013 to 2019.

A Founder of Draken International, Inc. now Draken US and Draken Europe, Kerby is the Executive for Aircraft Fleet Acquisition.  He also flies as an Aggressor Pilot in the F-1 Mirage, A-4 Skyhawk, and L-159 Honeybadger for Draken helping to train both US and allied military fighter pilots.  He is a FAA Designated Pilot Examiner in both the F-1 and the L-39.  Kerby holds a Surface level (Solo and Formation) Statement of Aerobatic Competency (SAC), in the F-4, T-33, L-39, MiG-17, T-28, MS-760, T-6, and RV-series aircraft.  He is currently one of only two civilians Certified Flight Instructors in the F-4 (non-military) in the US.  He has amassed over 15,000 flight hours in over 75 types of aircraft.